THE CLIMATE AND THE NORTH POLE

BITTER COLD IN THE DEEP NORTH

The main features of the climate in the Polar region are permanent continental ice and also sea ice. In both summer and winter, a mass of very dense cold air hovers over the Arctic. The main cause of this is the low angle of the Sun’s rays. This means that the Polar region loses more heat than it receives from the Sun or additional sources (the oceans and the atmosphere).

The difference in climate from one region to another is due to the fact that the Earth is round, and the seasons are caused by the fact that its axis of rotation is not perpendicular to the Sun. In the Arctic, there are two main seasons but they are far from equal: a long, icy and dark winter lasting 9 months and a short, very cool summer lasting only 3 months. Spring and autumn last just a few weeks each.

COLD AND DRY: AN ICY DESERT

At the North Pole, the sky is often clear, even in winter, because humidity is very low. Because the sea is frozen, water cannot evaporate, so rainfall is as low as in the Earth’s deserts. On the other hand, the coastal regions surrounding the Arctic have a more humid climate. During the pre-summer thaw, low-pressure systems from the Atlantic roll in over the ice pack bringing a little snow and even some rain and fog.

A CLIMATE THAT IS COLDER ON LAND THAN AT THE POLE

During winter, it is not as cold on the ice pack (about -40°C at the North Pole) as it is on the surrounding continents (down to -67°C in Siberia!). But the continents’ coastal regions are not as cold as the inland zones. The opposite is true in summer: the continental landmass warms up faster and reaches higher temperatures than the oceanic zone (a record of 36.7°C in Siberia while the North Pole can reach 0°C).

A CAP OF COLD OVER THE POLE

There is a mass of cold, dense, Arctic air permanently stationed over the North Pole that creates a high-pressure system. And this involves an extraordinary inversion of the usual temperature situation, because the air is actually warmer at an altitude of a few hundred metres than it is at ground level. This mass of cold dense air tends to flow southwards as wind, but the wind direction is deviated by the Earth’s rotation, meaning that the winds in these high latitudes are predominantly East or North-East.
The lower, Arctic air layer is topped by Polar air that is not quite as cold, and at about 60°N this is surrounded by a belt called the Polar Front, a low-pressure belt generating westerly winds and involving a veritable clash between cold boreal air coming down from the Pole and warm tropical air coming up from the Equator.

The Arctic is a region of complete contrast between continuous daylight in summer and the darkness of a seemingly interminable winter. The Arctic Circle is in fact the line that joins all the points where the Sun does not cross the horizon at the solstices: it does not set at all on 21June and does not rise at all on 21 December. The Sun’s unusual position is due to the fact that the Earth’s axis of rotation is inclined rather than perpendicular to the Sun. So “inside the Arctic Circle” is not an abstract notion: it is the geographic zone from where one can experience the fabled “midnight sun”. Once inside the Circle, as you move further north the number of 24-hour nights in winter and 24-hour days in summer gradually increases. At the North Pole itself, daylight and darkness each last exactly 6 months.
An example here is Longyearben in Spitsbergen: the Polar night lasts 3 months (November, December and January) and the continuous daylight lasts 4 months (May-August). The period of continuous daylight is longer because the rays of sunlight curve downwards slightly as they pass through the very cold lower layers of the atmosphere, which means the Sun can still be “seen” even though it is actually below the horizon.

GREENLAND: AN EVEN HARSHER CLIMATE

Greenland has the only veritable polar ice cap in the Arctic, meaning that the climate is even harsher (10°C colder) than at the North Pole, except along the coast and in the southern part of the landmass where the Atlantic has a warming effect. The marked stability of Greenland’s climate is due to a layer of very cold air just above ground level, air that is always heavier than the upper layers of the troposphere. The result of this is a strong, gravity-driven air flow down the slopes (i.e. catabatic winds), generating gusts that can reach 200 kph at ground level.

NORTHERN EUROPE IS WARMED BY THE ATLANTIC

The coastal zones of the landmasses in northern Europe (Iceland, Norway, Spitsbergen, etc) are warmed well into the higher latitudes by temperate water in one branch of the North Atlantic Current, itself spawned by the Gulf Stream. This water raises the temperature, even inside the Arctic Circle as far north as Spitsbergen. This means that northern Europeans enjoy a milder climate than the other peoples of the Arctic.

The ice in the Arctic does not cool the atmosphere as strongly as the immense frozen surface of the Antarctic at the other pole of the globe. In the deep of winter, the combined continental ice cap and the sea ice around the Antarctic amount to nearly 35 million square kilometres, with the ice cap alone accounting for 15 sq. km of ice cover, between 3 and 4 kilometres thick. That is ten times larger than Greenland’s ice cap. In winter, the tremendous mass of ice in Antarctica and the enormous temperature contrast that it causes generates a continuous ring of low-pressure systems around the austral continent, creating an atmospheric whirlwind or vortex that isolates the Antarctic air from the rest of the atmosphere. There is no such phenomenon in the Arctic.

The huge store of cold in the polar regions is accentuated by the mantle of snow and ice that reflects most of the incident solar light back into space (the albedo effect).

The voluminal mass of water is nearly 1,000 times as great as that of air, and its viscosity is 60 times higher. This means that the ocean has very high mechanical inertia, so ocean currents move 100 times more slowly than the air flows in the atmosphere. The calorific capacity, or specific heat of a given substance is the amount of heat necessary to raise by 1°C one unit of mass (in grams for solids and mols for gases) without changing its physical state, or phase. Specific heat is about 1 cal/g/°C for sea water and 0.237 for air, at constant temperature. Specific heat is not to be confused with latent melting or vaporisation heat, which is the mount of heat per mass needed to change the state of a substance, again assuming constant temperature.

The mass of the Earth’s atmosphere is roughly 3,000 times less than the mass of the oceans and the specific heat of water is 4 times greater than that of air. This means that the first 2.5 metres of water in the world’s oceans contain as much heat as the 40 kilometres of atmosphere that surround them.

The central region of the Arctic is very dry. Why? Firstly because the water is frozen and releases very little water vapour into the atmosphere. And secondly because (according to the laws of physics) cold air can retain very little moisture. But on the peripheral regions of the Arctic, particularly in summer, thick fogs can form along the ice-free coastlines of landmasses that are bathed by cold oceanic currents (Canada, Alaska, Svalbard, the Kuriles, Kamchatka).

JEAN-LOUIS ETIENNE AND THE POLAR CLIMATE

During his solo overland trek to the North Pole, Jean-Louis Etienne naturally had to adapt to Polar conditions, particularly the temperature and the light, and try to put them to use.
“On 6 March 1986, when the aircraft took off leaving me alone to face the ice, the temperature was -47°C (…)”.
“Every evening, however calm the weather seemed, I prepared for the worst by building a wall of ice around my tent to protect it from any violent winds”.
“I always navigated by the Sun, which was very low on the horizon. As long as my shadow was in front of me, in other words to the north, I knew I was going the right way”. (Jean-Louis Etienne, The Poles, Arthaud, 1992)
When the “Antarctica” wintered in Spitsbergen, the to-and-fro flow of the “warm” North Atlantic Current meant that the “Antarctica” had to endure alternate freeze and thaw phases that sometimes complicated daily life aboard. For example, the crew suddenly needed to devise a solution to limit the water damage when the frozen condensation inside the vessel began to melt.

Frost is caused when water vapour in the atmosphere freezes on the surface of a very cold body. The accumulation of ice that results can be dangerous, to aircraft for example. The same frosting effect can cause spray to freeze and build up thick crusts of ice on the superstructure of ships, eventually making them top-heavy. This phenomenon is well-known to Newfoundland fishermen. Frost accumulating as ice can also disrupt numerous other human activities because of its heat- and electric-insulating effect.

In the Polar regions, the darkness at night-time is less black than some people imagine. Twilight lasts much longer than in lower latitudes because the Sun stays low on the horizon for longer (due to the angle of the Earth’s axis of rotation and the fact that it is a globe). It is said that on a cloudless evening, when the Sun is 6° below the horizon you can still read a newspaper, and that the daylight only fully disappears when the Sun is 18° below the horizon.

In the depths of the Polar winter, the Moon is as high in the sky at midnight as the Sun is at midday in summer. In these white landscapes covered by snow and ice, the Moon is the major source of light. In fact the human eye, starved of sunlight, can even detect starlight… 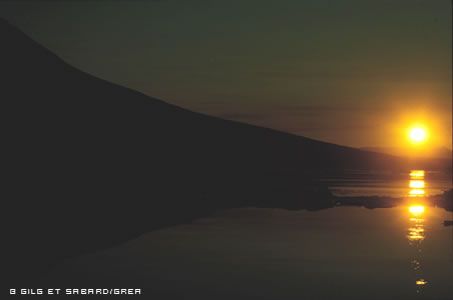 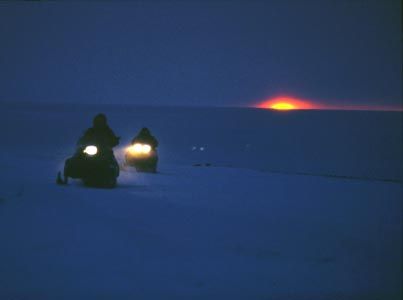 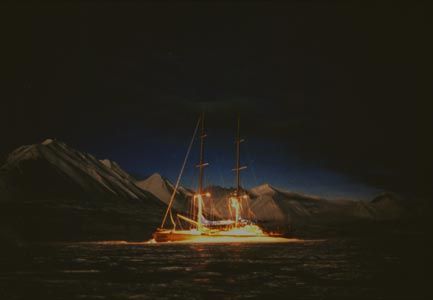 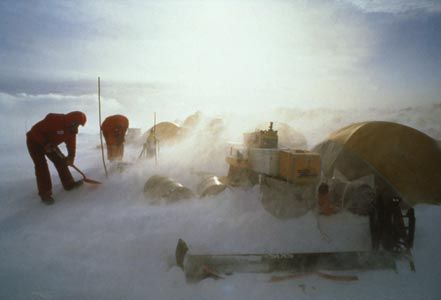 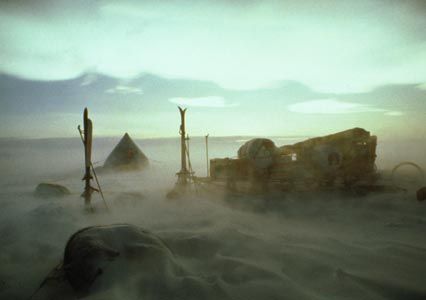