About 20 mammals live in the Arctic – foxes, reindeers, lemmings, hares, ground squirrels, shrews – as well as a few hundred different insects and numerous birds. So the fauna in the Arctic is more abundant than in the Antarctic, where the largest “terrestrial” creature is an insect; apart from that there are only birds. But Arctic fauna includes no reptiles or amphibians because there is simply not enough sun for them.

LIFE RHYTHMS DICTATED BY THE CLIMATE

During the short northern summer, Arctic animals feed and reproduce. The young animals have to grow very fast because only a few weeks after they are born they will have to face the onset of a cold winter or else begin a long migration to warmer climes.

MIGRATING SOUTH TO AVOID THE COLD

In both Siberia and Canada, many animals migrate southwards towards the taiga when winter approaches. Huge herds of caribou (the Canadian name for reindeer), for example, will migrate across waterways and swamps to reach the vast forests of the Deep North. And when animals migrate, their predators (wolves in the case of the caribou) won’t be far behind.

ADAPTING TO COPE WITH THE COLD

When winter comes, warm-blooded animals have to conserve their warmth. Some animals insulate themselves by growing thicker fur or plumage, or by accumulating layers of fat. The smaller mammals (lemmings, shrews, voles) burrow in under the snow to benefit from the warmth still stored in the ground and they feed on plants buried under the snow. Others, like the ground squirrel (or gopher), hibernate.
The insects and aquatic life forms adopt a slower mode of life (eggs, pupa).

STAYING WARM TO KEEP OUT THE COLD

In the tundra, the difference between the outside air temperature and the body temperature of a mammal can be quite significant – up to 80° in winter. But if the animal’s body temperature falls even just a few degrees, it can die. The only exceptions here are animals that hibernate.
Mammals produce their own body heat by metabolism, by “burning” the energy contained in their food. Many people suppose that the animals in the tundra have to search hard to find enough food, but in fact this is not the case. In summer, the tundra vegetation is quite rich and it grows fast thanks to the permanent sunlight. And in winter, all that food is preserved “in the fridge”, where the cold prevents it from decomposing. The animals’ main problem is how to minimise their loss of body heat.

There are several ways an animal can prevent heat from escaping from its body :
> Fur : An animal’s fur often grows thicker in winter and also becomes whiter. This not only reduces heat loss but also provides excellent camouflage.
> A layer of fat : This provides heat insulation and also acts as a reserve of energy for mammals in extreme climates.
> Body shape : Arctic animals usually have a squat, stocky shape so that they lose proportionately less heat per body mass. Their extremities (ears, tail, nose, paws) are also smaller for less exposure to the cold.
> Blood circulation : This is reduced in their extremities and is concentrated in their vital organs, so Arctic animals have cold noses and feet.
> Hibernation : Few Arctic animals hibernate because they cannot survive if their body temperature falls below 0°C. Furthermore, in the tundra the ground is frozen and the animals cannot dig burrows to spend the winter in. Only a few animals, such as the dormouse (marmot) and the ground squirrel (gopher) manage to find well-drained (and therefore drier) slopes where the ground will not be so frozen.
> A nest : Some animals, such as the lemming, burrow under the snow layer and build a nest using dried plant material to insulate themselves from the damp. Female polar bears make a “nest” in the snow itself and gestate during winter.

Hundreds of species of insects live in the Arctic and they have developed a multitude of ways to cope with the cold climate :

* Some of these animals are not typically Arctic and can also be found in the taiga and on the steppes of Central Aisa. Examples are the whistler hare and the bobak marmot as well as a number of carnivores, such as the wolf (Canis lupus), the wolverine (Gulo gulo), the brown bear (Ursus arctos), the fox family and the ermine.

Arctic animals have adapted to the cold not by chance but by necessity :

> Reindeers have very broad hooves, like snowshoes, so that they can walk without sinking too deep into the snow.

> The snowy owl has feathers right down underneath its feet to help insulate it against the cold and the damp.

> When the ground squirrel hibernates it reduces its heartbeat by 98% and can withstand a 5°C drop in body temperature while still remaining conscious enough to wake up from time to time.

> Some Arctic fish produce their own “antifreeze” so that they don’t freeze solid. 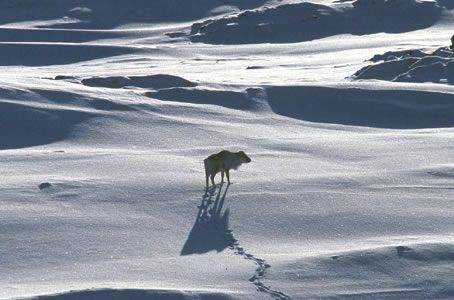 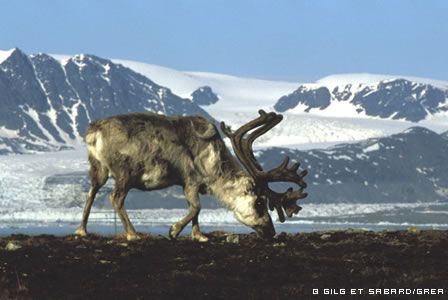 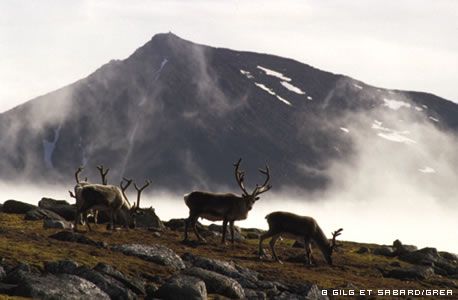 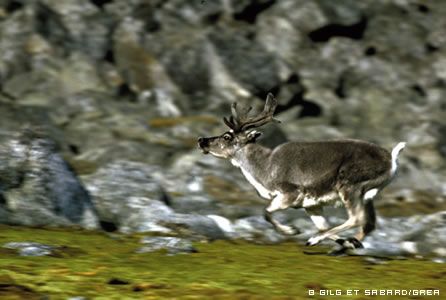 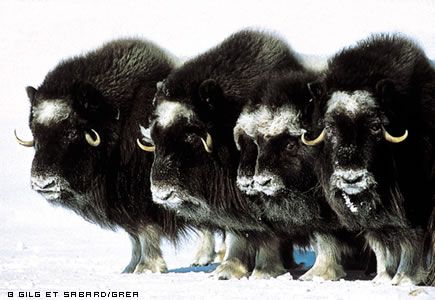 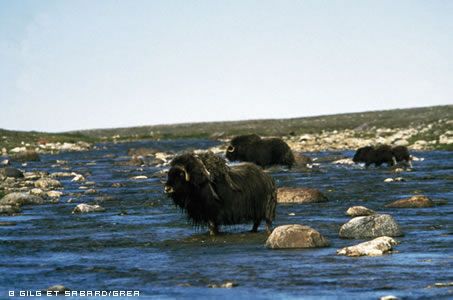 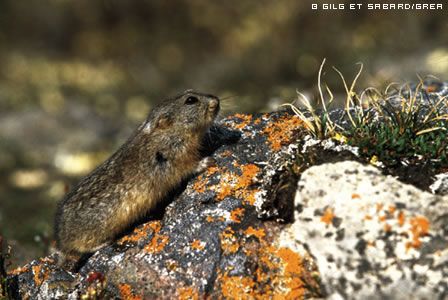 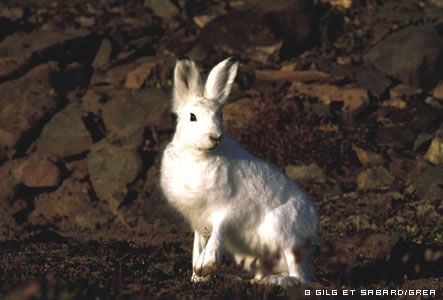 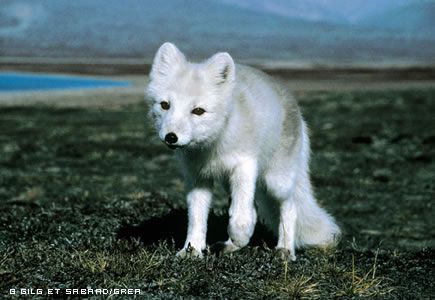 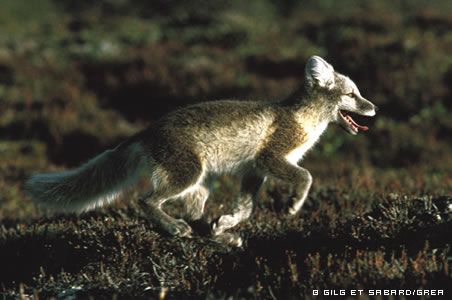 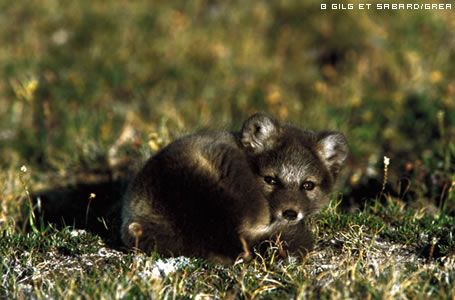 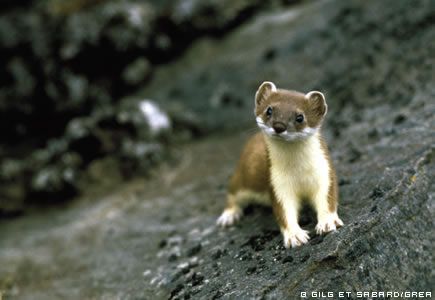 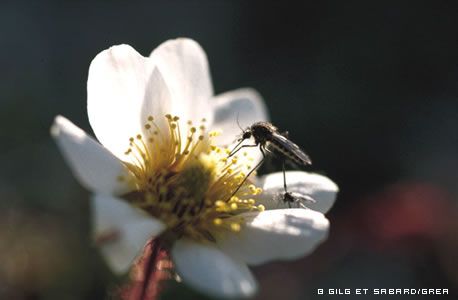 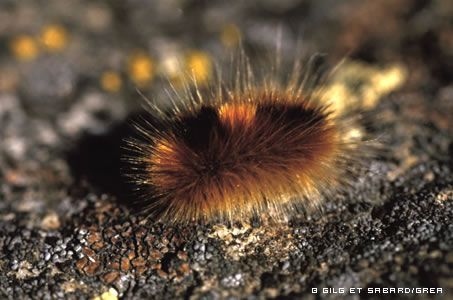 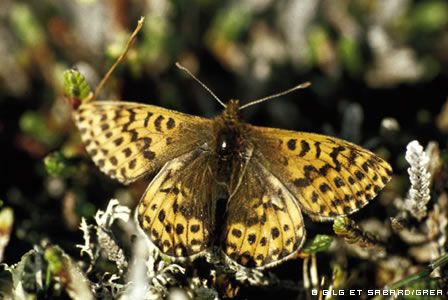