Any snow that does not melt in summer accumulates, to be packed down, layer after layer, over the years and thus transformed into ice. Most of this ice will not become part of the sea once again for a very long time. This is how the huge thick ice caps form on top of polar landmasses such as Greenland and the continent of Antarctica.

A glacier is a sort of frozen river clinging onto a mountainside. The weight of the enormous mass of ice causes it to slide slowly downhill, gouging its own valley ever deeper. Glaciers are so slow that their movement is imperceptible to the human eye, but they are powerful enough to wrench chunks of rock from the bed of the valley as they pass. These rocks, ground into a mass of smaller stones called moraine, are deposited along the way or left at the foot of the glacier when it melts in summer.

When the foot of a glacier happens to be on the coast, the tongue of ice is forced out onto sea, starts to float and then breaks off into chunks of ice called icebergs that are carried away to sea. When this happens, a glacier is said to be calving.
The icebergs, which are sometimes trapped in the pack ice, may also have quantities of moraine fused into their underside, and as the iceberg gradually melts these will fall to the seabed.

ICE CAPS CAN WEIGH CONTINENTS DOWN

During the Quaternary period, thick heavy ice caps covered much of northern Europe and North America. The weight of the ice caps bore the continents down and they sank lower into the fluid mantle of the Earth, rather like a ship when it is being loaded. Today, freed of their load, these continents are very slowly rising up again.

The Earth boasts two ice caps, or “inlandsis” (“inland ice” in Icelandic) today. In the Southern Hemisphere an enormous ice cap covers the 14-million-km2 continent (in reality an archipelago) of Antarctica, and in the Northern Hemisphere Greenland’s landmass is hidden under 1.8 million km2 of continental ice.
The Greenland ice cap, anchored between two coastal mountain chains, has a central basin where the ice is more than 3 kilometres thick in places. The ice in the heart of the ice cap takes a very long time to reach the sea, and at the bottom of the mass there is ice that is tens of thousands of years old. This ice contains invaluable information for scientists studying the Earth’s climate history.

HOW WERE THE POLAR ICE CAPS FORMED ?

Scientists have studied the chemical composition of the polar ice and have deduced that these enormous ice caps were built up over thousands of years. But for that to have happened, there had to be much heavier snowfalls than there are today in these icy deserts. Yet the cold air over the poles is dry and should not have generated such heavy snowfalls.
During the most recent ice ages in the Northern Hemisphere, the temperature of the ocean was 1 or 2 degrees higher than it is today. That differential was enough for the thermal gradient between the “warm” ocean and the very cold landmass to cause snowstorms to develop.
The Greenland ice cap was formed about 3 million years ago when the climate got colder (since then, there have been more than 25 cold periods). Under the weight of the ice cap, the continent sank down more than a kilometre into the Earth’s mantle, forming a wide basin.

UNDER THE THICK ICE CAP, COLD REMAINING FROM THE LAST ICE AGE

ICEBERGS ARE FORMED WHEN GLACIERS CALVE

When the slowly moving ice nears the coast, it is channelled by coastal glaciers and its speed increases, sometimes reaching several metres per day. Once the tongue of ice, which is lighter than water, reaches the sea it lifts off its rocky bed and starts to float. Currents, tides and wind combine to break up this floating glacier, and large chunks fall off with a noise like thunder. These are what we know as icebergs, or “mountains of ice”.

In recent years oil companies have been exploring offshore zones in the Barents Sea with a view to producing the oil and gas resources there. This has led to studies focusing on calving by the Svalbard glaciers, because a number of these produce icebergs that are a danger to the offshore oil facilities, particularly when the glaciers speed up, or surge, thus calving even more.
Very little is known about this phenomenon of intensive calving and the periods when it occurs, which are different for each glacier. This lack of knowledge is a big handicap for efforts to understand the present state of the ice caps and to be able to predict how they will react to any change in climate.
Among the 90 glaciers calving to icebergs at sea that have been studied, 55 surges have been recorded in the last 100-150 years, but no pattern has yet been identified. The only progress made has been that we now have a list of potential “iceberg calvers”.
During a glacier surge, which is always sudden, large areas of crevasses appear, the front of the glacier bulges and the moraines sag and the volume of ice sticking out into the sea increases significantly. As a result, an enormous amount of ice from higher on the glacier is pushed downhill, causing the front to advance much more rapidly (the glacier’s speed can reach 100 metres per day as the underside is lubricated by melt-water due to friction). Under normal conditions, a glacier is in equilibrium: the ice removed at the bottom is balanced by ice being formed at the top from snowfalls. But surges tend to unbalance the system and markedly diminish the overall amount of ice in the glacier.

In addition to the pack ice, the Arctic Ocean carries icebergs.
The origin of these huge ice cubes can be recognized by their shape. The icebergs of narrow and thick glaciers like those of the islands or Greenland are massive and high, whereas those coming from the flat of Ellesmer Land are tabular. These flat icebergs, which can reach several km2, are also used as drifting stations by scientists.
They are sometimes caught in the pack ice and drift towards the North Atlantic. Bursting with wind and waves, 400 icebergs reach, on average, the 48th parallel, off Newfoundland.
To avoid accidents, in winter, the sea routes are pushed back several hundred kilometers to the south. Everyone knows the dramatic story of the Titanic …

ARE THE ARCTIC GLACIERS MELTING ?

The continental ice (or ice caps) in the Arctic contains 7% of the fresh water on our planet, i.e. between 2 and 3 million km3. If all that ice melted, it would cause the level of the oceans to rise 6.5 metres. The water from the Greenland ice cap would account for 96% of this and the glaciers elsewhere would add the remaining 25 cm. In comparison, if the glaciers in the Alps melted, the sea level would rise by only 1 mm. But glaciers are not as cold as the ice cap itself and react more quickly to variations in climate.
This is why scientists have been studying Arctic glaciers since the 1960s, measuring the new ice at the top and the melt rate at the bottom and trying to determine whether the overall amount of ice present is stable or diminishing. This final result (or glacier “balance sheet”) factors in all meteorological data over the year and can vary depending on snowfalls and atmospheric temperatures. So the state of a glacier is a good indicator of the local climate.
Results to date show that Arctic glaciers as a whole are not losing huge amounts of ice. But according to computer modelling of temperature rise as a function of human-related greenhouse gas emissions, they should be all losing large amounts of ice. Conclusion: for the moment, Arctic glaciers are resisting climate change.

WHAT IF THE ICE DOES BEGIN TO MELT ?

If the glaciers and ice caps melted, the additional cold, fresh water could have a direct impact, firstly on the local ecosystems and secondly on the salinity and the temperature of the seas in the Arctic and thus on the circulation of ocean currents and the sea level worldwide.

JEAN-LOUIS ETIENNE AND THE GLACIERS

“We were all revelling in the magnificent calm lndscape when suddenly the silence was broken by a dull explosion. (…) The noise could only have been made by the glacier; a huge block of ice must have broken off. (…) Less than a minute later, a wave lifted our boat, banging the hull against the sides of the narrow ice cradle that held it”.
J.-L Etienne, “La complainte de l’ours”, J.-C Lattès, 2001

In Antarctica, Jean-Louis Etienne’s sailing vessel “Antarctica” rescued some tourists who had accidentally fallen from a small boat. They had ventured too close to the front of a glacier just as a large chunk of it fell off into the sea, causing a wave to overturn the tourist launch!

> During the last three ice ages, the volume of freshwater ice on Earth stood at 75 million km3, compared with 33 km3 today. The ice took so much water that sea level fell by 120-160 metres, depending on the zone.

> Freed from the weight of ice that thrust it down into the Earth’s mantle during the last ice age, Scandinavia is now rising up again. It rises by between 40 and 120 cm per century.

> For each glacier, there is a specific altitude called the Equilibrium Line Altitude (ELA) above which the snows add to the ice and below which the ice is depleted by melting. 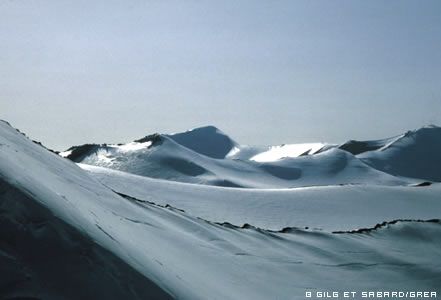 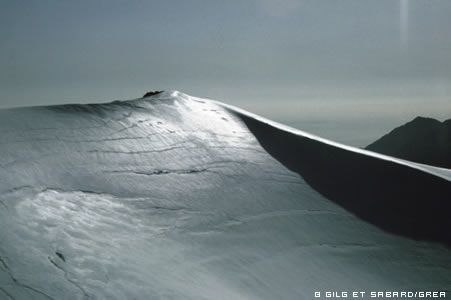 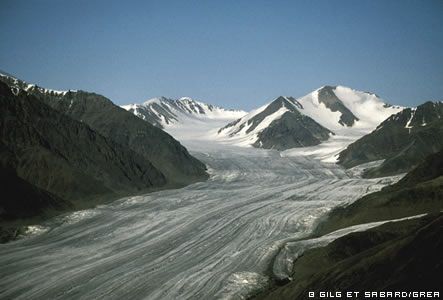 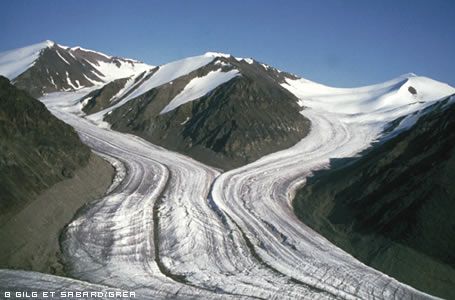 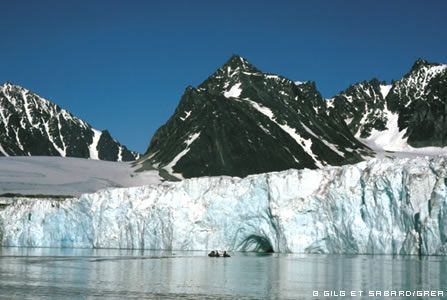 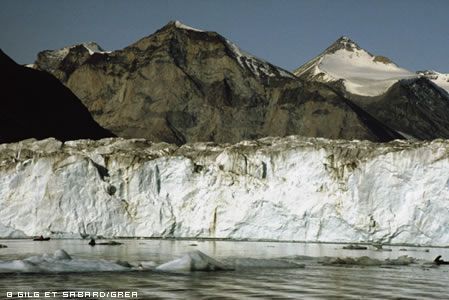 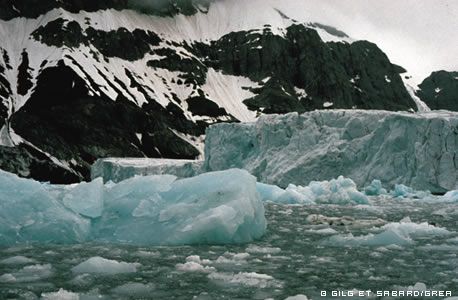 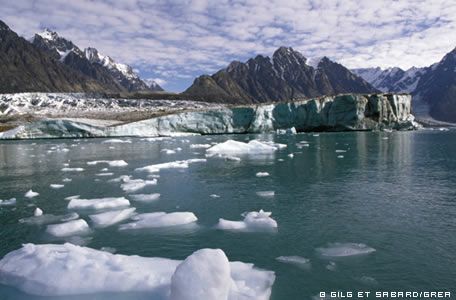 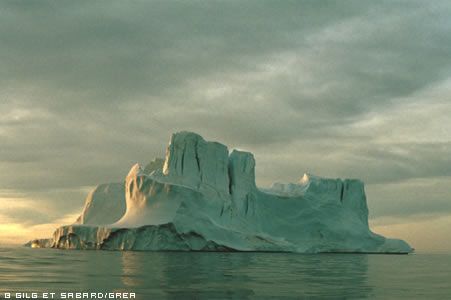 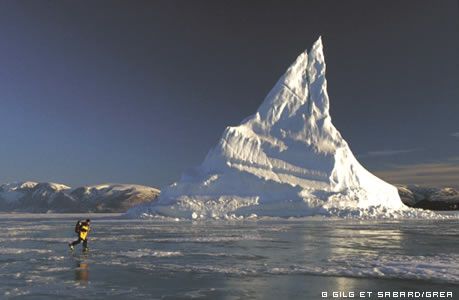 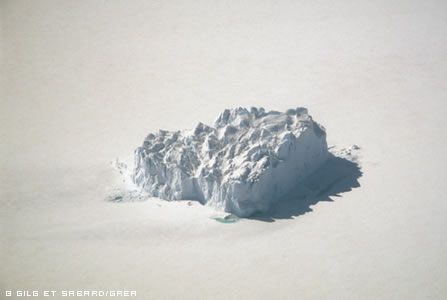 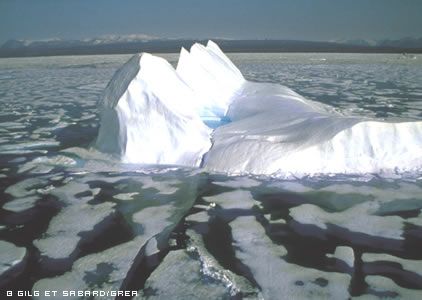 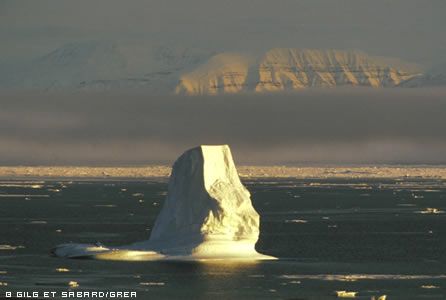 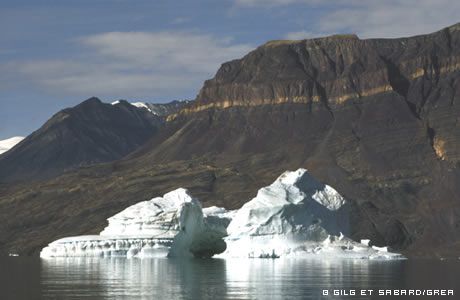