A LAYER OF ICE ON THE SURFACE OF THE SEA

Once the Arctic summer is over, the freezing Polar winter (-40°C) sets in, sometime quite suddenly. The surface of the ocean gets colder, and when the water reaches -1.8°C the first ice crystals form. Once there is a thin layer of ice, it insulates the seawater from the colder air and the process slows. From then on, the pack ice slowly gets thicker, with the new ice forming on its underside, until it is about 2 metres thick.

As it freezes, seawater forms a matrix of crystals of freshwater ice and small drops of saltwater. During the winter, these droplets migrate together to form wider networks and finally whole pockets. As they do so, they also migrate downwards until they “re-enter” the seawater. This means that as the sea ice gets older, it becomes less salty.

In mid-winter, the pack ice extends over nearly 15 million km2. During the summer, about half of this melts. The remaining pack ice can last 2, 3 or 4 years, and sometimes more, and can grow to be 4 or 5 metres thick. During its lifetime, this surface crust of ice will travel right across the Arctic Ocean, driven along by ocean currents. This is called the Arctic or Transpolar Drift.

Compared to the 4,000 metres of water it floats on, the layer of sea ice is like a thin eggshell. As it is pulled along by the currents and blown by the winds, this fragile shell cracks and opens up to form ice-free leads, while the broken plates of ice ride up on one another forming pressure ridges up to 10 metres high.

The nature of the first thin layer of ice to appear depends on the state of the sea. When the sea is calm, large ice crystals form parallel “needles”, building into a surface layer 1 or 2 cm thick (rather like iced soup). If the sea is rough, the first freeze produces crystals facing in all directions that build up into a thick viscous layer about a metre thick called “grease”. Only then will the surface later truly freeze hard, but this can take between 9 and 36 days.

The Antarctica caught in the ice in Spitzbergen. © F. Latreille/7eme Continent

As long as the ice is thin, swell and wind break it up into "pancakes", which eventually weld together to form the young ice pack, which is then able to hold the snow. It takes several weeks for the ice to reach a thickness of 60 cm. By slowly expelling air bubbles and brine, the ice compacts, softens and becomes blue and translucent.

IN THE HEART OF THE ICE

While the layer of ice is still thin, the swell and the wind can break it into “pancake ice” but in the end the pancakes will fuse together again to form a layer of young sea ice on which the snow can settle. Within a few weeks, the ice can be up to 60 cm thick. As the bubbles of air and pockets of saltwater are eliminated, the ice gradually becomes more compact, blue and translucent.

Under the effect of winds, currents and tides, the ice pack is constantly breaking up and reforming. Here, open water channels open up, as well as some kind of internal lakes (polynyas) due to local upwelling of less cold water. There, the cracks are closing.
The collisions between the fragments create ripples of compressed ice, whose crest can reach 10 meters and whose keel can sink up to 60 meters!
Close to the coast, the ice pack is also shaped by the tides, the inflow of fresh water, the coastal currents, the exposure to the wind or the sun. A bank of ice, placed on the bottom, remains attached to the coast. This "shore ice" can be thicker than the pack ice itself and anchored to the bottom; off shore, it is prolonged by a band of "fast ice", which can survive for more than 10 years. Some icebergs are sometimes found trapped there.

WHEN THE MELT COMES

At the end of May, the snow and the first centimeters of ice melt, forming pools on the surface of the ice pack. This water reflects less solar energy than bare ice and warms up faster, accelerating the melting locally. When the pack ice breaks up, large sections are released (floes) and move with the currents. In the center of the Arctic Ocean and along the sheltered coasts, the ice pack will not thaw.

THE GREAT BALLET OF ARCTIC DRIFT

The icy puzzle of the Arctic Ocean follows, over the months, the general movement of the waters that carry it. This is the Arctic drift.
The ice pack moves according to two main currents: a large cyclonic loop, centered around 80° N-155° W and a long drift that crosses the ocean, from the Bering Strait to the Greenland coast. On average, the ice can rotate 5 years in the Arctic loop, while a block will take about 3 years to follow the central trans-Arctic current.
The Arctic drift was discovered thanks to the debris of the wreck of La Jeannette (1881) found 3 years later thousands of kilometers away from the wreck site. Nansen with the Fram in 1893-1896 and Papanine in 1937 used this drift.

TO STUDY THE ICE PACK

Leads, compression ridges, ice of different salinity and age, seasonal pulsation, drift: all the life of the pack ice is followed by scientists thanks to drifting stations installed on the ice, beacons and satellites.

NAVIGATE IN THE ICE PACK

The concentration of sea ice is expressed subjectively in tenths of occupied sea surface; thus, a pack of density 9/10 or 10/10 is impenetrable - except by powerful icebreakers - , while Antarctica could start to evolve in 4 or 5/10.

The surface water layer of the Arctic Ocean is particularly favorable to freezing, because it is softened by the influx of relatively low-salinity water from the North Pacific and fresh water from the large boreal rivers. "In the Arctic, a layer of water that is much saltier - and therefore denser - blocks this dive and forces the surface water to remain in contact with the cold air for longer.

"A specific phenomenon of the high latitudes is the "smoking sea", produced, generally, in winter by the arrival of very cold air on a relatively warm sea: the intense evaporation that results has all the appearance of smoke."
(Geostrategy of the Arctic - Economica, 1992)

The thicker the ice, the less heat conduction - thus the freezing rate - is good. "In the leads, freezing rates are a few centimeters per day, while thick ice has a growth rate closer to a millimeter per day (...): a compensating effect of thermodynamics that tends, on the one hand, to fill in the open water areas (...) and on the other hand, to limit growth at the base of the deformation ridges." (The Planetary Ocean - Sciences et avenir 1994)

Since freezing immobilizes liquid water molecules that were in motion until then (thermal agitation), the freezing of the ice pack releases a quantity of energy corresponding to this initial agitation; this warms up the surrounding air! This energy will again be necessary for the melting to take place - that is to say, to put these water molecules back into motion.

The melting of one gram of ice at 0° C consumes about 3.34.105 J.kg-1 calories (latent heat of fusion), that is to say 8.5 times less energy than the evaporation of one gram of liquid water around 20° C (latent heat of vaporization).
By definition, 1 calorie is "the amount of heat needed to increase the temperature of 1 gram of water by 1° C"; it is equivalent to 4.186 joules, and a work of 1 joule per second is equivalent to a power of 1 watt.

The density of sea ice is in a fairly wide range, depending on the salts and air contained: between 0.857 and 0.920. This ensures a comfortable buoyancy in Arctic sea water of density 1.024 to 1.026.

The expansion coefficient of sea ice plays an important role in the evolution of the pack ice. Unlike that of pure ice, it varies considerably with temperature. In addition, each dissolved salt - in the chemical sense of the term - reacts differently to freezing. These phenomena result in tensions, sometimes very strong, within blocks where ice of different salinities are juxtaposed.

A BIT OF VOCABULARY

JEAN-LOUIS ETIENNE ON THE ICE PACK

It was on this sea of icy obstacles that Jean-Louis Etienne walked alone, pulling his sled, to reach the North Pole in 1986.

"At times, the ice floes rise up before my eyes; the plates collide, pressing against each other with disturbing creaking sounds. Sometimes they even rise like walls, only to collapse in a dull din that spreads for miles. Sometimes a sudden explosion and the ice pack cracks, the plates spread out leaving a sinister black zigzag: it is the icy water of the Arctic Ocean! First, it evaporates in a curtain of fog and then, as soon as the crack is stabilized, it freezes again. "(The Poles - Arthaud, 1992)

During the Antarctic mission Erebus, in 1994, the Antarctica remained for many days trapped in the pack ice, particularly compact in the Ross Sea that year. The crew looked for possible passages by spying on the color of the sky, locally darker above the open water leads. An unexpected solution: to follow in the tracks of an American icebreaker!

> One of the processes of desalination of sea water uses freezing. Indeed, the freezing of salt water, if it is slow enough to avoid the inclusion of brine droplets in the ice, gives pure ice.

> The climates of the regions covered by glaciers or ice floes are dry climates, because ice emits much less vapor than water, in a low temperature atmosphere.

The pulsations of the ice pack

OTHER SITES TO VISIT 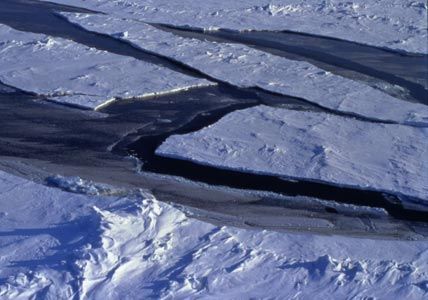 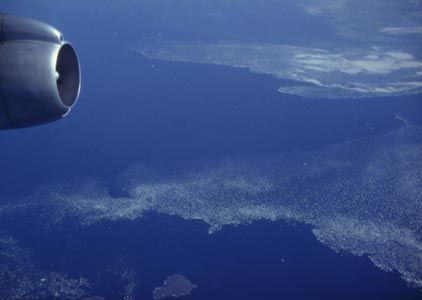 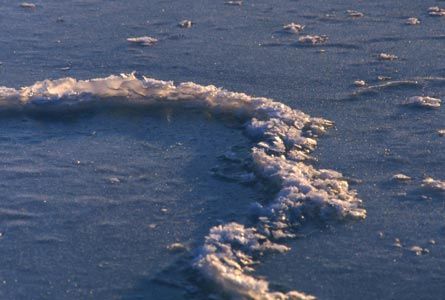 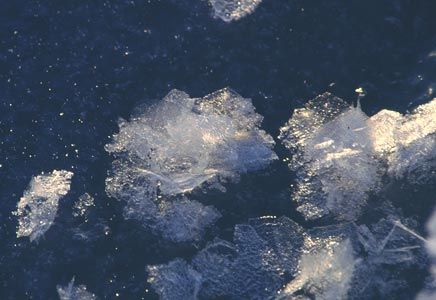 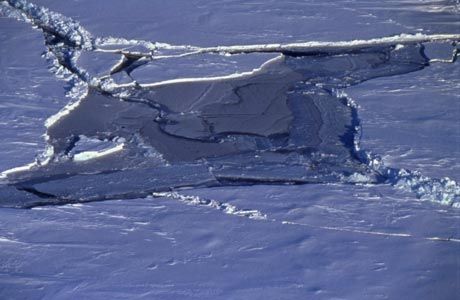 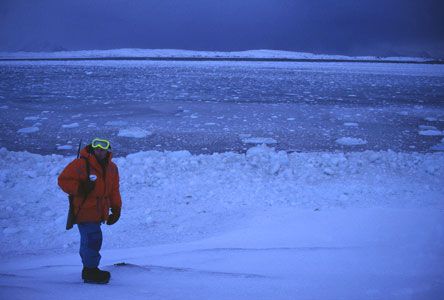 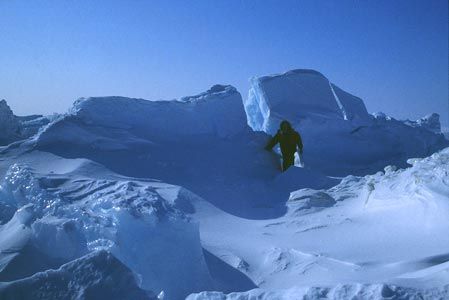 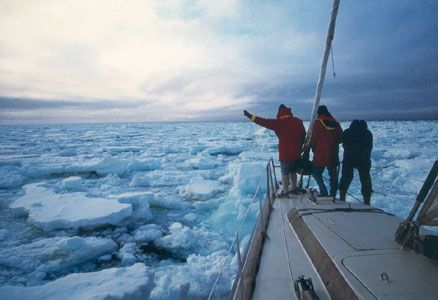 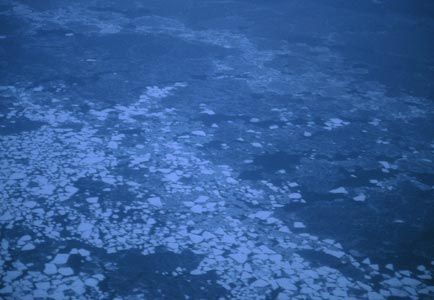