WHALES AND OTHER CETACEANS

WHALES AND OTHER CETACEANS

Cetaceans have adapted so well to life in the water that until 1753 they were classified as fish! Yet they are really 100% mammals, they are warm-blooded, they breathe air and they suckle their young. Down through the millennia of evolution, they have become perfectly streamlined, but their tail is horizontal, not vertical like a fish tail.

TEETH FOR EATING, BALEEN FOR FILTERING

The order of Cetaceans has two sub-orders, those that have teeth and a single vent or blowhole (odontocetes) and those that have baleens or whalebones and two vents (mysticetes). The latter are the true whales. The odontocetes (cachalots, etc.) eat squid and fish. The mysticetes (right whales, etc.) filter enormous volumes of water between their baleens, filtering out billions of planktonic organisms that form their food.

Whether they are rutting, playing, fighting or fleeing, whales communicate via what we know as whale songs. Whales do not have vocal chords so they produce sounds with their larynx and their blowholes. The songs of some of the larger species of whale can be heard up to 900 kilometres away. The song may vary from one individual to another, and in different seasons, but all songs can be understood by all individuals of the same species.

CETACEANS OF THE DEEP NORTH

Several species of cetacean can be found in the Arctic: the right whale, the bowhead whale, the Minke whale… But the strangest of them are without doubt the white beluga and the narwhal with its long twisted “horn”. Whale-hunting is culturally important for several peoples of the Deep North, particularly the Inuit.

50 MILLION YEARS AGO: THE FIRST CETACEANS

The most distant ancestors of the cetaceans are the mesonychidae, small, land-based, four-footed, meat-eating mammals that lived close to the sea some 50 million years ago. Within the next 10 million years, this creature had evolved into a large toothed whale like Basilosaurus, the “lizard ling”. Except that the whale wasn’t a reptile but a mammal. Whales with baleens instead of teeth seem to have appeared a little later, i.e. less than 30 million years ago. So today’s cetaceans as we know them have been living in the water for more than 40 million years and are now perfectly adapted to the aquatic milieu: their nostrils have evolved into vents on the top of their heads; their rear legs have disappeared and the others have evolved into flippers; their skin has lost almost all its hair; and the body is now supple and streamlined like that of a fish.
Thanks to modern molecular biology techniques, research biologists now think that the closest living relative of the whale is the hippopotamus, which is apparently also descended from the mesonyx family.

Like all mammals, whales have to come back up to the surface to breathe. This necessity governs all aspects of their daily lives. In fact, whales spend about a quarter of their lives on the surface. Although the average human can only hold his/her breath for 1 or 2 minutes (the record is more than 7 minutes…) whales can stay under water for between 15 and 90 minutes, depending on the species. This is because their physiognomy has evolved to meet this need, allowing whales to store large quantities of oxygen and also use less oxygen during their dives:
– Their lungs are proportionately smaller than a man’s but their breathing process is more efficient: each breath exchanges 85-90% of the volume of air in their lungs, compared to about 15% for a man.
– The blood is very rich in the red corpuscles that transport oxygen, so their circulation diffuses oxygen very efficiently.
– Their muscles contain large quantities of the particular molecule that fixes oxygen.
– When they are under water, they can slow their heart rate; only the vital organs then receive oxygen, and whales can also lower their temperature to save even more energy.

Cetaceans emit a broad range of sounds, but most of these are inaudible to man. The ones we cannot hear are part of the biological sonar that gives them a “picture” of their surroundings.
The sounds they emit travel as sound waves through the water and bounce back off any solid object (boat, animal, seabed, cliff, ice pack…). The cetacean picks up these echoes and its brain converts them into an image, a real-time “picture” of the environment it is swimming through. This “sixth sense” that cetaceans possess is matched by very specific morphological adaptations: the sounds are emitted in a single direction, thanks to the form of the animal’s head. In odontocetes like the beluga, the system is even more sophisticated: the beluga has a hump of fat on its forehead called a “melon”, and this works like an acoustic lens to focus the sound waves that the beluga emits.
The system they use to receive the sound echoes is very efficient too: in addition to the auditory canal that land-based mammals possess as well, cetaceans also use a fatty cordon in their lower jaw and which is directly connected to their ear and is also capable of emitting sounds.

Cetaceans migrate in search for food and suitable conditions to reproduce. Most large whales feed in the bio-rich waters of the higher latitudes during summer and then return to temperate or even tropical waters for the winter. But other species swim long distances and remain dispersed right across the globe, and scientists have not yet understood why they live like this.

TRADITIONAL HUNTING AND THE DISAPPEARANCE OF SOME SPECIES

By the end of the first millennium, whales were being hunted in the seas around Norway. The whale has long been regarded as a major source of raw materials and food: oil (for heating and lighting); organs and natural substances (pharmaceuticals and beauty products; whalebone (corsets, umbrellas). A 20-metre whale can supply 8 tons of blubber and 24 tons of meat. In the 19th century, with the invention of the harpoon cannon, whales were slaughtered in huge numbers.
The start of commercial-scale petroleum production lowered the demand for whale oil, but whales had already been nearly exterminated. Today, with some rare exceptions, whaling has been outlawed by international agreement (the International Whaling Commission, or IWC). However, this creates problems for peoples of the Arctic that live off whale hunting. Protective whale sanctuaries have also been set up.

Jean-Louis Etienne has encountered whales on several occasions in the course of his expeditions.

During the EREBUS mission in Antarctica, he relates that: “one day, a little Minke whale came up for breath in the small pool around the Antarctica. Then it dived again and swam around the boat for a while, and came up to put its muzzle on Eric’s rubber boat, quite unafraid. It even let us stroke it. We were amazed by this trusting contact and took it as a sign of welcome”.
(“The Erebus Expedition”, J-L. Etienne and P. Averous, Arthaud)

And in the Valdes Peninsula during the same expedition, he recounts: “I was paddling quietly among the whales when one of them swished its tail and sent me and my kayak three metres into the air, to splash down next to the whale, which took fright. I swam back to the Antarctica’s tender, with a broken rib. (…) You can approach whales quite easily under water and stroke them too. These peaceful animals have a highly developed sense of touch. The right whale that sent me flying in the air was undoubtedly frightened by the noise I had made”.
(“Antarctica, an adventure in the southern seas”, J-L Etienne and C de Marlave, Gallimard)

The names of some cetaceans, in three languages :

> Sound travels four or five times as fast in water as in air, and travels much further as well. Cetaceans capitalise on this, as do scientists and the military (sonar, depth-sounders, acoustic buoys, submarine listening devices, etc.).

> The range of different sounds that can be emitted and received by the beluga allow it to stay in contact with others of its species, despite the loud background noise made by the pack ice.

> Oil and mining operations, shipping, fishing, military operations… all these increase the amount of noise travelling through the waters of the oceans, and this “sound pollution” seems able to disturb the life of cetaceans.

> Corset whalebones or reinforcements take their name from the material they were made from in the late 19th and early 20th centuries; the baleens from whales (umbrella ribs were also made from this).

> The “horn” of a narwhal is actually a tooth (hyper-atrophied in the male); it inspired the horn of the mythical unicorn.

> Like orcas (killer whales), belugas and narwhals, porpoises and dolphins are cetaceans with teeth. – Even at this late stage in their evolution, baleen whales actually have teeth for a short time when they are still foetuses, but the teeth – a last genetic vestige of their origins – disappear before the whales are born.

HOW WHALES CAN BE STUDIED ?

> Observation : The different types of whales can be recognised by means of direct visual contact: the venting sound, the body size, the shape of the tail and the dorsal fin.

> Telemetry : scientists place small radio transmitters on whales to monitor their movements underwater. Signals can be picked up using radios (the study their movements on a local scale) or by satellite (to study their travels on a global scale over time).

> Hydrophones : this method allows scientists to record the songs of the whales and to identify the territory of the different groups.

> Biopsy : scientists can take small samples of skin or blubber from cetaceans and use them to study the blood ties between individuals (drawing up a sort of genetic family tree), determine the sex of the animals and measure the amounts of pollutants in the bodies of living animals, etc. 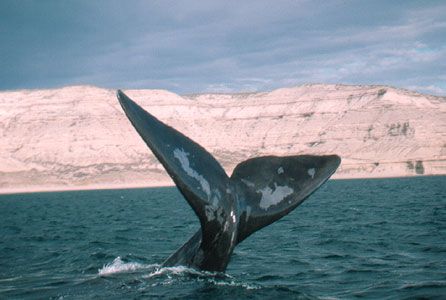 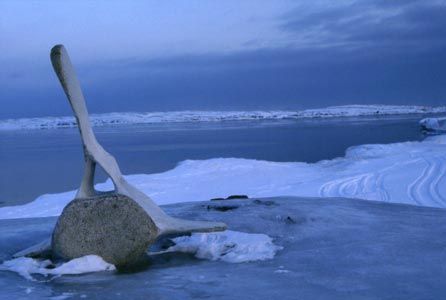 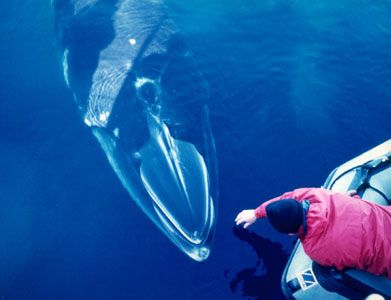 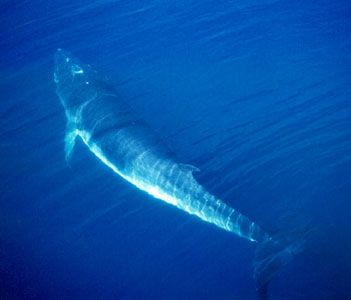 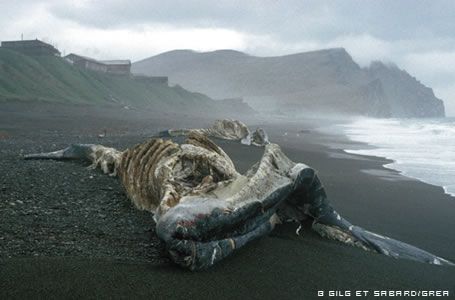 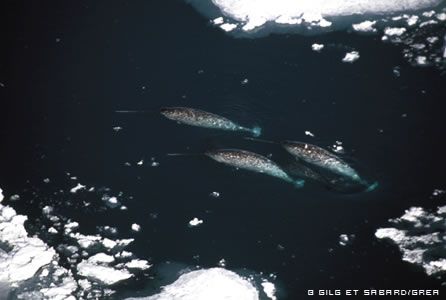