LORD OF THE ARCTIC

The polar bear is the largest carnivore on Earth. A big male bear can weigh more than 700 kilos! Polar bears mainly hunt on the ice pack, killing seals when they come up to the surface to breathe. But they also spend time on shore, where they eat eggs, plants and even rubbish thrown away by humans. The polar bear is right at the top of the oceanic food chain; indeed it is often classed as a marine mammal.

Underneath its usually immaculate white fur coat that helps it blend into the landscape, the polar bear has a layer of fat that protects it from the cold and serves as a reserve of energy when prey is scarce. The bear’s skin is black, which absorbs the heat that is channelled inwards by the strands of white fur, and the it has stubby ears that reduce its heat loss. Lastly, the polar bear has wide paws that spread like snow shows and stop it sinking too deep into the snow.

AN ANIMAL WITH ALMOST NO PREDATORS

The polar bear has no predators except Man, so it is lord of all it surveys. Bears are naturally curious and will explore anything that seems new, but once its curiosity is satisfied, a bear will usually go away. Although it looks like a great big teddy bear, the polar bear can be a very dangerous animal, but it is a protected species and cannot be killed except to protect human life.

AN ANIMAL WITH ALMOST NO PREDATORS

The polar bear has no predators except Man, so it is lord of all it surveys. Bears are naturally curious and will explore anything that seems new, but once its curiosity is satisfied, a bear will usually go away. Although it looks like a great big teddy bear, the polar bear can be a very dangerous animal, but it is a protected species and cannot be killed except to protect human life.

Scientists have never found any fossils of polar bears (Ursus maritimus) so the species is probably quite recent. Their ancestors, some 200,000 years ago, were brown bears that adapted to a coastal milieu and learned to hunt seals.

A DIET BALANCE THAT DEPENDS ON THE SEASONS

From March to June, polar bears hunt seals on the ice pack. They eat up to 40 kilos of food per day, mostly fat, and can store up to 26 cm of fat under their skin. When the pack ice melts in summer, food becomes scarce. Male bears can live for about 6 months without eating. Over winter, female bears spend 7-8 months in their dens in the snow, suckling their cubs, and during that time they have no food intake.

GESTATION PROGRAMMED TO WAIT FOR SPRING

Polar bears mate in April-May. Once the female’s ovule is fertilized, the growth/maturity process is “suspended” until September-October: the mother-to-be then seeks out a zone where there is abundant snow and digs a den where she will spend the winter. Bear cubs are usually born in December and are suckled in the snow den until spring. This delay programmed into the bear’s ovules means that the cubs to discover the outside world during the most suitable season in terms of food availability and weather conditions.

Curious polar bears have been known to go into houses, to climb on boats and to try to get aboard buses. Bear cubs have been seen sliding down snow drifts on their buttocks, chasing birds and playing with the wind. All of which may be ways to learn to solve new problems; the ability to adapt is probably an indispensable survival skill in the polar bear’s extreme environment.

OF BEARS AND MEN

Churchill is the northernmost town in Canada before the Arctic wilderness. By the end of the autumn, the town can be invaded by up to 60 polar bears, attracted by the prospect of scavenging food in the town’s rubbish dump. The townspeople try to scare them away so that the bears do not forget how to find food in their natural milieu. The food that they find in towns is very different to what they hunt in their natural habitat, and little is known about the impact that a change of diet could have on the bears.

AT THE TOP OF THE MARINE FOOD CHANGE: TOXIC WASTE GENERATED BY MAN

DDT, PCBs, hydrocarbons, heavy metals, radio-active substances… the polar bear is at the top of the food chain and ends up with all its preys’ pollutants in its fat layers. Not just pollutants from local mining and petroleum operations but also pollutants that have been washed down by rivers and brought to the Arctic by ocean currents and the winds.

The first International conference on polar bears was held in Alaska in 1965. Well after the “romantic” era of the trappers, bear hunters continued to kill hundreds of polar bears a year (a single hunter with special bait rifles could kill up to a hundred every season). Veritable “Arctic safaris” using boats, planes and helicopters were organised right up until the mid-1960s. Today, an international agreement (with provision for some hunting by local native peoples where relevant) protects both the polar bears and their habitat. As a result, the number of animals in the Arctic has increased from 5,000 to 20,000. However, the combination of pollutants and the shrinking (now a recognized fact) of the pack ice that is their hunting ground could well mean that the days of the polar bear are numbered.

JEAN-LOUIS ETIENNE AND THE POLAR BEARS

“A polar bear! The fearsome carnivore was right there, standing up behind the wall, its powerful claws gripping the opening. At once excited and petrified, I found it hard to remain calm. Utwig didn’t move an inch, his head at the same height as that of the bear. The creature’s black muzzle wavered and spiralled not far from the old man’s white beard, its mischievous, cheeky eyes suggesting that it had found its dinner at last. Suddenly, Utwig raised a jam spoon and moved it towards the bear’s muzzle, murmuring what passed for endearments… The bear tilted its head and stuck out its tongue, calmly and delicately licking the spoon clean.”
J-L Etienne, “The bear’s lament”, J-C Lattès, 2001

> A polar bear usually walks at about 4 kph but can run at more than 40 kph. When pursued by a snow scooter or helicopter, if a bear runs for too long it can die from a heart attack.

> A polar doesn’t actually walk, it ambles, placing its back paws in the prints made by its front paws. This may be in order to reduce heat loss.

> Polar bears are so hot in their fur coats and layers of fat that in summer they look for areas where there is still snow or dig hollows in the permafrost to lie down and get cool.

> The Eskimo word for polar bear is pisugtooq, or “eternal wanderer”. 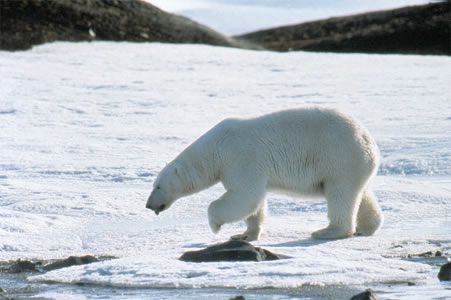 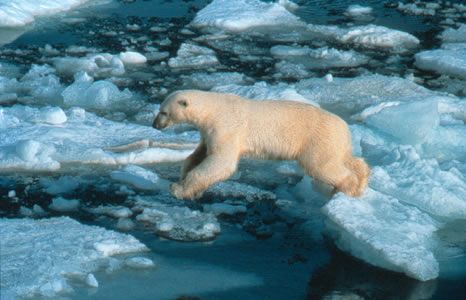 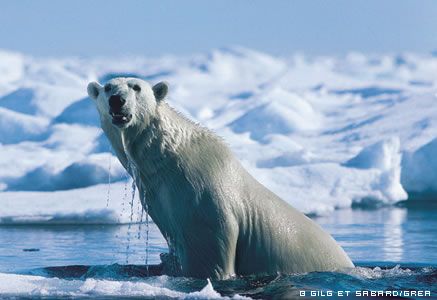 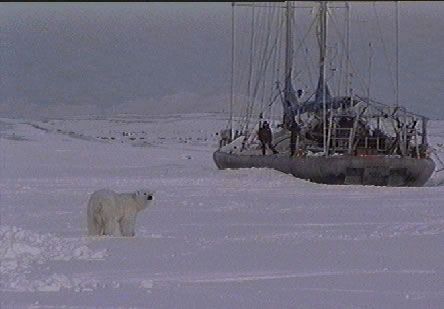 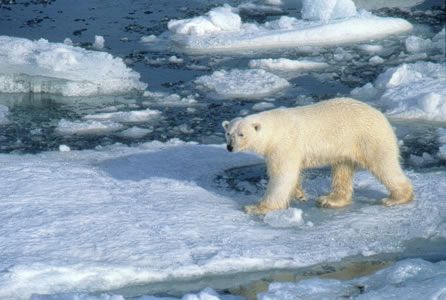 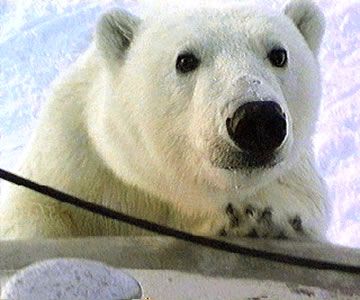 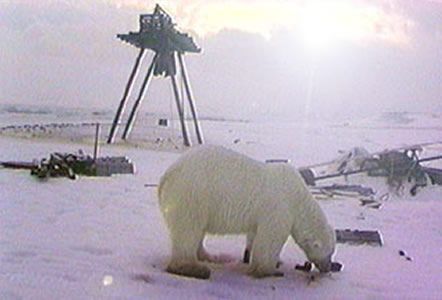 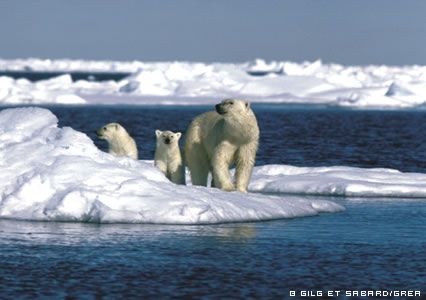 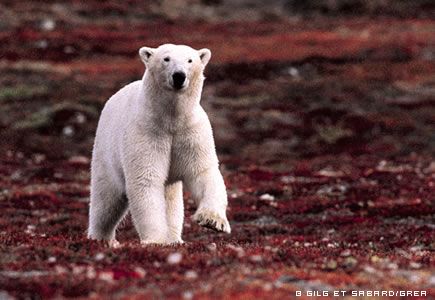