GEOGRAPHY OF THE ARCTIC REGIONS

LANDS AT THE EDGE OF THE NORTHERN HEMISPHERE

The geographic North Pole lies in the middle of an ocean, and the rim of that ocean is formed by the Deep North, the northern-most parts of the American (Alaska, northern Canada and Greenland) and Eurasian (Lapland and Siberia) continents and by the islands that dot the offshore zone (Svalbard, Franz-Josef Land, Novaya Zemlya, Svernaia Zemlya, the Canadian archipelago, etc.).

EXACTLY WHERE DOES THE ARCTIC BEGIN ?

The limits of the Arctic are difficult to define but of course the main parameter is the cold. The most widely accepted limit is the line or isotherm to the north of which the temperature never rises above 10°C during the hottest month (in this case, July). This isotherm corresponds very closely to the limit where forest becomes tundra.

THE ARCTIC OCEAN: DESTINATION OF ALL MAJOR RIVERS IN THE DEEP NORTH

All the water from the major rivers in the north of Russia and America flows into the Arctic Ocean, after draining regions that are sometimes thousands of kilometres away. The three largest rivers, the Ob, the Lena and the Ienessei, each pour more than 500 km3 of fresh water per year (35 times the flow of France’s Seine River) into the sea, thus reducing its salinity.

WHAT IS MEANT BY THE “POLAR CIRCLE”?

That is the line formed by all the points at which the sun does not cross the horizon at the solstice, i.e. it does not set at all on 21 June and does not rise at all on 21 December. Nights and days get progressively longer as you move northwards, and they last 6 months at the Pole itself. The circle’s position is determined by the inclination of the Earth’s rotation axis in relation to the Sun.

Going beyond a few common characteristics (the length of periods of daylight and darkness at the solstice, very low temperatures in winter), the Arctic (around the North Pole) and Antarctic (around the South Pole) zones are quite different. This is especially true as regards geography. The North Pole is in the middle of an Arctic Ocean bordered in every direction by immense continents densely populated and belonging to several nations. On the other hand, the South Pole is in the centre of a land-mass that is cut off from surrounding lands by thousands of kilometres of the Southern Ocean; the continent is almost uninhabited and belongs to all of Humanity rather than any one nation. The only people found there are several hundred scientists from various countries camping “down there” to study this immense continent.
The two polar oceans are also quite different in terms of biological productivity and fishing potential. The cold seas around the North Pole, as the meeting point of different masses of water and with extensive continental-shelf zones have simply huge resources. These are among the richest waters on Earth and were among the earliest fishing grounds exploited by Man. But the waters around the Antarctic, despite recent exploitation of krill and the fish under the ice, have not lived up to the hopes placed in the zone in recent years. Lastly, the seasons are of course inverted, and Christmas falls right in the middle of the southern summer.

NORTH POLE AND SOUTH POLE: AT THE ENDS OF THE EARTH’S ROTATION AXIS

The Earth’s geographic poles correspond to the “exit points” of the imaginary axis or axle on which our planet rotates. Follow this axis beyond the North Pole and you arrive at the North Star, at the extremity of the Little Bear. But star-gazers beware! Because the Earth oscillates as it spins, rather like a top, its axis of rotation points at different spots in space over the years. In the time of the Pharaohs, it pointed to the star Thuban in the constellation of the Dragon. And in another 5,000 years, the “pole star” will be in the constellation of Cepheus.

OUR EARTH IS A MAGNET

The planet we live on acts as a magnet, and its magnetic field stretches from the Earth’s surface thousands of kilometres out into space.
By the late 16th century, the physicist Gilbert demonstrated that the Earth’s magnetic field was comparable to the one that would be generated by an enormous bar magnet (i.e. bipolar) placed at the centre of the globe and then inclined by about 11° from the planet’s rotation axis. Mathematical proof of this was provided by the astronomer-physicist Gauss two centuries later. Naturally, there is not really an enormous bar magnet hidden deep underground, but the Earth behaves as if there was.
This terrestrial magnet fluctuates in a number of ways. Since the beginning of our era, about 2,000 years ago, the power of our magnet has diminished by half. Furthermore, over geological time, the earth’s magnetic field is periodically inverted for no apparent reason (perhaps currents in the planet’s core are to blame). So it is that back in the days before Man had “invented” fire (some 70,000 years ago), a compass needle would have pointed south. These magnetic inversions, recorded in rock with high ferrous content, such as basaltic lava, can be used to date lava flows. They can also be used to visualise the way the floor of the oceans expanded starting at the oceanic rift ridges.

The needle of a compass indicates our planet’s magnetic poles, not its geographic poles. This means that when reading maps based on compass readings we have to make allowance for this. The “real” magnetic poles are the result of multiple phenomena that disturb the “theoretical” magnet. Not only are they not directly opposite (in the antipodes of) each other, but they move several kilometres each year on the surface of the globe, undoubtedly as a result of some disturbance deep in the bowels of the Earth.
We call the magnetic pole located in the boreal region the Magnetic North Pole. But there are also other poles, called “geomagnetic poles” located exactly where the axes of the imaginary bar magnet cut the Earth’s surface. These poles are at the “mathematical” antipodes of each other and are located about 1,250 km from the geographic poles.
Today, the Magnetic North Pole lies about 1,400 km from the Geographic North Pole (and 800 km from the geomagnetic pole) and the Magnetic South Pole lies 2,800 km offshore from Adelie Land, 2,800 km from the Geographic South Pole.

> Everyone knows that the needle of a compass points North, but why? And which North does it point to? Very simple experiments can show that a magnet exerts an influence on the space around it, creating what physicists call a magnetic field. This field is based on the two opposite ends of the magnet, called its north and south poles. This field is quite invisible and impalpable, but it can be visualised: cover a magnet with a sheet of paper and sprinkle iron filings on the paper; the filings will align themselves relative to the magnet, and these lines between the poles will form a chart of the magnetic field. Physicists usually say the lines exit the magnet via the north pole and enter it via the South Pole.

> But beware! Any pole of a magnet will be attracted to the opposite pole of another magnet. A compass needle is a magnet, and the Earth is a magnet, so from a physicist’s viewpoint, the “north pole” of a magnet, in turning towards what we know as the North Pole, must in fact be indicating the south pole of the earthly magnet. So the real North Pole is near the Geographic South Pole. But the terms we use for convenience in geography and navigation have obscured the strict physical definition.

> Gauss’s equations show that the Earth’s magnetic field is not just generated by the two poles; it has to be corrected for other influences too. The magnetic field, measured at the surface of the globe, is rated at about 63,000 nanoTeslas (a Tesla is the unit used to measure magnetic field strength or intensity; 1 nT = 10-9 T) at the poles and only half that at the Equator, i.e. 500 times weaker than the intensity as measured between the arms of a horseshoe magnet bought in the local hardware shop. Nevertheless, the sheer size of the earthly magnet is enough to disrupt our planet’s entire environment (the magnetosphere).

> We still have a lot to learn about the Earth’s magnetism, but we do know that it is mainly due to agitation (or a “self-activating dynamo”) within the Earth’s molten metallic core. At the surface, however, the heterogeneous nature of the Earth’s mantle and its rocky crust, and even the “magnetic storms” that take place in the Earth’s environment (solar wind bursts), deform the main magnetic field (about 10% of its magnetic intensity).

> The geographic poles are fairly stationary, moving about within an area only about 20 metres by 20 metres. This movement is due to the oscillation of masses of air in the atmosphere and is also thought to be affected by movement within the Earth’s liquid mantle.

> Arctic : the word is derived from the Greek arktos, for bear. So it means “facing towards the Great Bear”.

> Antarctic : this comes from “anti-arktos”, meaning opposite the Great Bear.

> Boreal : practically a synonym for arctic. Boreas was the Greek god of the North Wind, Aquilon for the Romans, son of Titan Atraeos and of Aurora. Today, boreal and borealis mean northern. 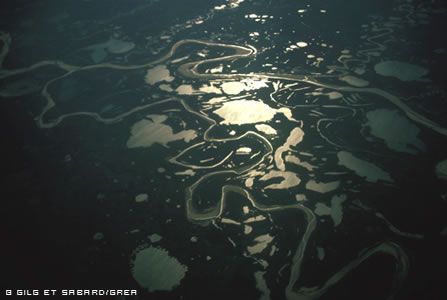 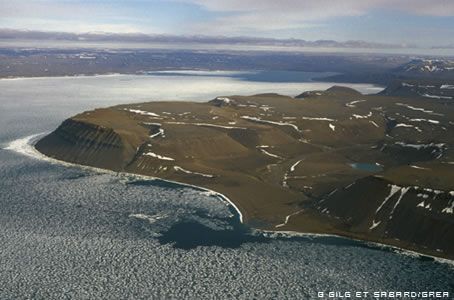 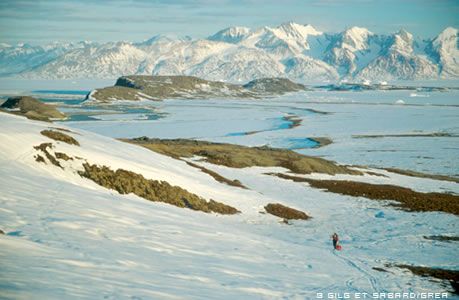 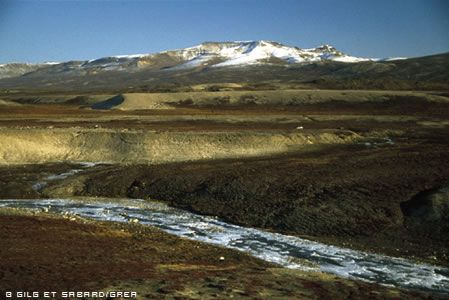 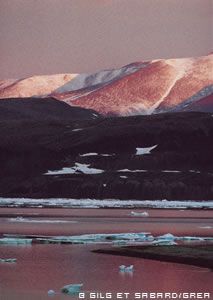 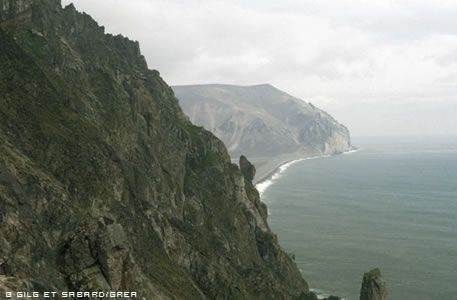 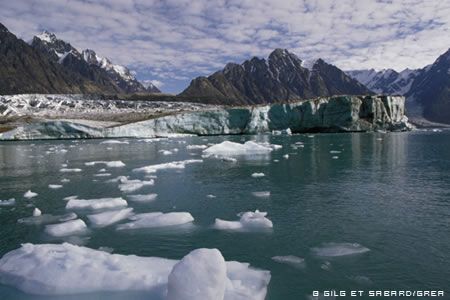 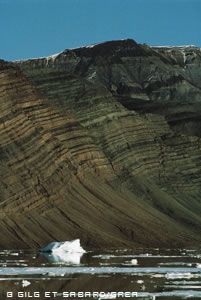 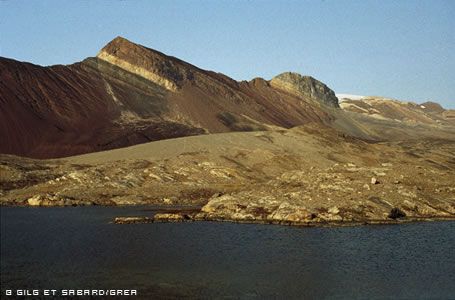